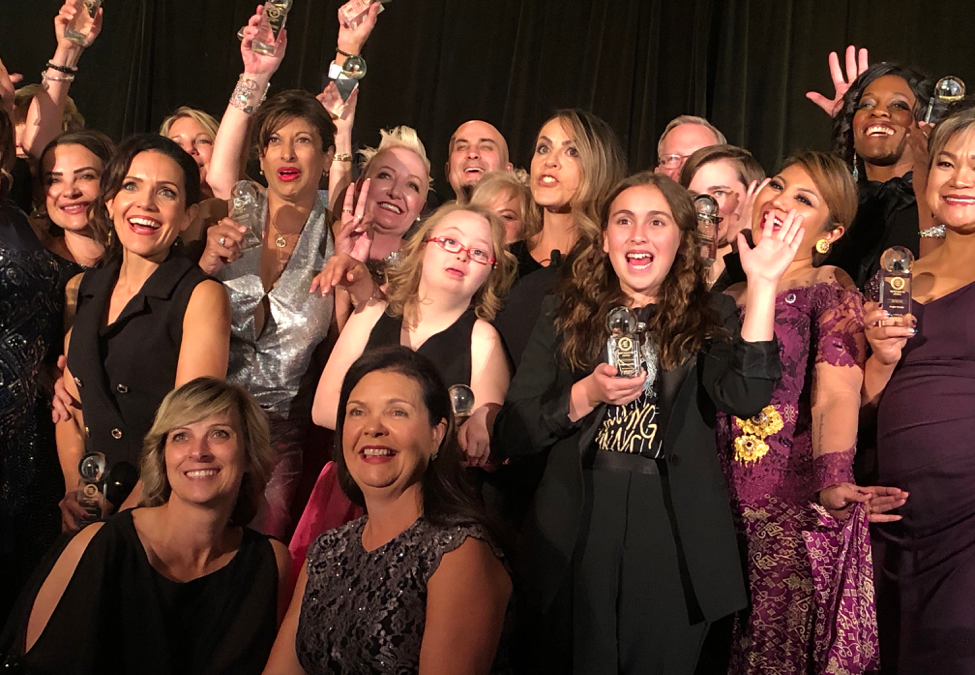 For the last two years I have had the honour of performing for the Women of Inspiration Awards both in Calgary and in Toronto. In the days before Covid 19 I would be excited at the thought of getting on a plane and travelling back to Toronto to perform again soon.   I also would be going back as a previous award winner, having won the Youth Excellence Award last year.

The way things are going, chances are the awards show might not happen, or it might look different.  One thing I know is the magic will still be there no matter the circumstances.

What makes the event special is the woman behind it all, Monica.  She is a dreamer.  “If your dreams don’t scare you they aren’t big enough” she says. She is a hard worker. She cares for those around her and she sees the best in everyone.

The first time on her stage I sang for the WOI I sang Titanium by David Guetta featuring Sia. When Monica asked me to think of another power song for the next years show, I thought instead of finding a power song, I’d write one! That was how F.R.E.E. was born.

She believed in me when I was learning to believe in myself.

Thank you for all you have done for me and so many other women out there! You are a true Women of Inspiration!

Inspired by those around me and the music that brings us all together!

Let’s start by taking a magical trip to the backyard of Brett Wilson, philanthropist, entrepreneur, owner of the Nashville Predators, and former Dragon. Outfits of white and bright graze the evening as songs that give you a wicked case of ear candy fill the large tent that contains the happy 1500 guests  feasting on an assortment of delicious treats! Shout out to my personal fave – Family Freezed Gourmet Ice Pops!

A few years ago I attended as a guest with my mom. Last year, I stood on the stage in his backyard to perform for the first time in front of what was then my largest audience ever!   Brett Kissel on my right, Brett Wilson on my left, I sang, my voice, a microphone, no music, just me. It seemed like I transported to a whole other world, filled with joy and music. It felt amazing. The song I sang was Brave by Sara Bareilles.

Flash forward one year later to 2019. Brett Kissel, again on my right, Brett Wilson on my left, but this time Brett Kissel’s entire band was behind me ready to play. I would sing Brave, with a full band and with Brett Kissel! The butterflies in my stomach flew away, as the band started to play. It felt like coming home to family.  I had read, dance like no one was watching. Now, I knew what that meant.

What no one would have known was that only 6 hours earlier, I rehearsed that song for the very first time with Brett and his band. In fact, it was the first time I ever played with a live band ever!  We ran the song three times, that was it. After my rehearsal my mom, my little sister, and I  went out to get some lunch. All I could think was, man I am hungry. All done my lunch, the song started playing over and over in my head. I wasn’t used to doing that song with a band. I wasn’t used to doing anything with a band. I had sang Brave so many times, I lost count. In my basement, in the car on the way to school, in smaller settings. That was my keyboard and me. This performance would be a first for me without my keyboard. I had to find a way to make it memorable. So, in the car, driving back to rehearsal,  I decided to put in a high note right at the end of the song. That note, would become the highlight of the song.

So many feelings happened that day for me. I felt intimidated, yet excited. Nervous yet overjoyed. The first time performing with a band was nerve-racking, but incredibly adrenalizing. I could have let the emotions swallow me whole, but I knew I had to be brave. Like the song says. Say what you want to say, and let the words fall out, honestly I want to see you be brave. Some people would have thought it was crazy to change a note in the car after rehearsal was over.  To be honest, I thought “Am I insane?” “I should have done this during rehearsal,” I told myself, but I knew I was capable, I knew I had worked hard for this moment, and I knew I had the support I needed.

Welcome to my blog. This is going to be fun!